“LIVE at THE LAST HOTEL is, above all, a musical love story – told in jazz. An inspired release from The Hard Bop Messengers.”

“Live At The Last Hotel”, the upcoming release from John Covelli’s Hard Bop Messengers, is a jazz album that literally tells a story. The visionary, original, genre-defying musical journey that reminds you of what jazz can be, was born from a residency at the REAL Last Hotel in downtown St. Louis.  Each song paints a picture with bounce and bustle, that takes you to a place and time that somehow feels both nostalgic and modern. The lyrics tell the story of the trials and tribulations of a fictional hotel through the eyes of its employees.

Covelli knew he had something special when he assembled this group and he gives them all room to shine.  Nick Savage, Chris Meschede, Luke Sailor, and Ben Shafer are, like himself, of the esteemed Webster University jazz program.  Matt Krieg, originally from St Louis, puts the vocals where they need to be to tell Covelli’s lyrical tale.

Covelli has played in dozens of bands over the years and learned just as many styles. His compositions are infused with such influences, including Latin, funk, chamber-classical, soul, blues and rock, and he hopes the result will have the audience tapping toes and bobbing heads along with every tune.   Come hear some hard bop music that will excite!  Remember the jazz messengers hard bop  living music hard bebop jazz swing life styles best jazz albums all time jazz songs live jazz best jazz albums of all time 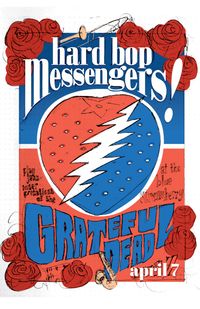 Hard Bop Messengers’ latest creative project focuses on jazz interpretations of the Grateful Dead. John Covelli, a 38-year veteran of the St. Louis music scene, leads his Messengers into new territory at this special Blue Strawberry engagement. The group recently shared a preview of this new creative endeavor with audiences at their “Live at The Last Hotel” performances in St. Louis and Chicago. A medley of “New Speedway Boogie” with an improvised segue into “Cumberland Blues” was a big hit with listeners and left the crowd asking for more. Noting the Dead’s 1970 release, “Workingman’s Dead”, those two songs appear back-to-back on the album but had rarely or never been combined into an extended jam. The Hard Bop Messengers’ performance in Chicago exhibits this mashup of musical styles. For this Blue Strawberry exclusive, expect some re-imagined arrangements of classic Grateful Dead songs delivered by top notch St. Louis musicians with a hard bop flare. This show will be sure to delight Dead fans as well as jazz aficionados.

Catch "Live At The Last Hotel"  in concert near you.